You are here:
Home >
News >
PRESS RELEASE SCIENCE YEAR 2020|21 - BIOECONOMY   Return of the teabags: "Expedition Earth" enters the next phase - Federal Minister Karliczek says: We need to strengthen soil protection The second phase of the nationwide citizen science campaign on soil research has begun. Now it's time to find teabags in soil all over Germany - the first one in an allotment garden in Berlin-Moabit. 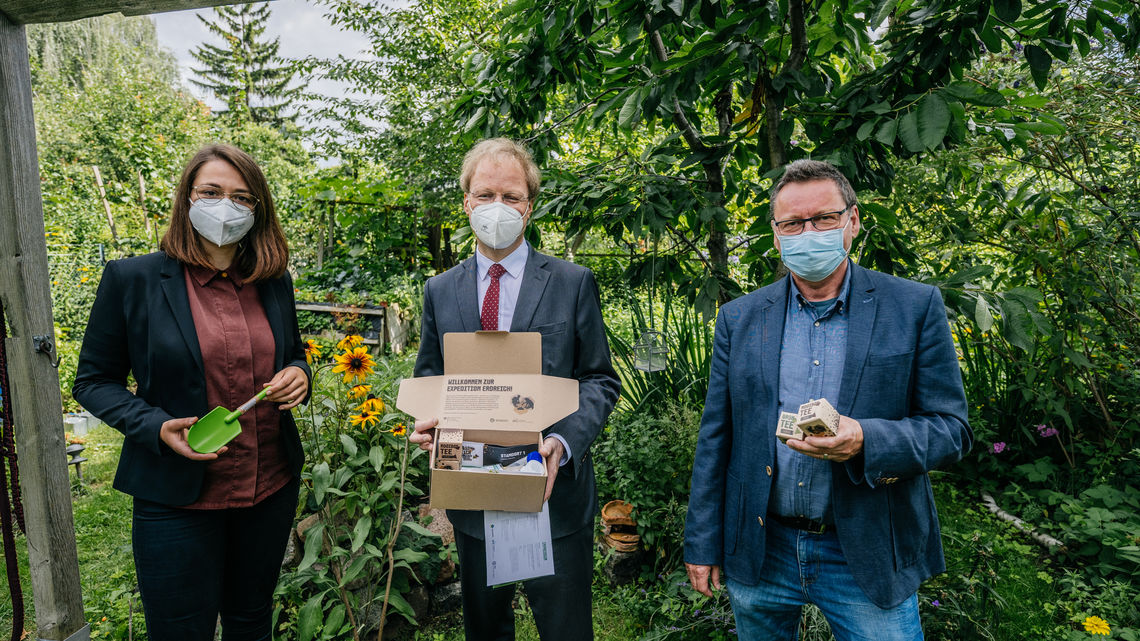 Return of the teabags: "Expedition Earth" enters the next phase - Federal Minister Karliczek says: We need to strengthen soil protection

The second phase of the nationwide citizen science campaign on soil research has begun. Now it's time to find teabags in soil all over Germany - the first one in an allotment garden in Berlin-Moabit.

Berlin, 4 August 2021 – Sandy soil with a slightly acidic pH value and a high rate of decomposition in an allotment garden in Berlin-Moabit - this is where Federal Research Minister Anja Karliczek had buried the first tea bags in April, launching the nationwide citizen science campaign "Expedition Erdreich". Since then, thousands of citizen scientists have examined the soils in their region and buried tea bags. They enter their results on soil type, pH value and soil use into an online database on the campaign’s website.

The tea bags  remain in the soil for three months. Now the first ones are dug up again an allotment garden in Berlin. They are dried and after that their final weight is determined. The data is used to calculate the so-called tea bag index and the decomposition rate in the soil.

Federal Research Minister Anja Karliczek explains: "We must protect our soils as our basis for life. Soils not only play a decisive role in safeguarding our food production, but also as a habitat for plants.  Thus, they are important for climate protection. With Expedition Earth, we are raising social awareness of the value that healthy soils have. We therefore draw attention not only to soils used for agriculture, but also to the soil in forests, gardens or parks.

We need a responsible approach to the rare resource of soil. For most of us, the soil on our own doorstep is taken for granted; hardly anyone takes a closer look at it. The participants of the 'Expedition Erdreich' including many families, neighbourhood initiatives, farmers, associations and schools have examined this important resource together. Educators and teachers have used the teaching and working material for outdoor activities and made the youngest among us aware of the issue. Thanks to the efforts of many citizen scientists,  we came one step closer to our goal of increasing society's awareness of our soils and thus contributing to more soil protection."

Once all the tea bags are dug up by the end of October, the soil scientists involved will analyse the data collected by citizens. "Now that the teabags are gradually being dug up again and all the collected soil data is being sent to us, the excitement in our team is rising," explains Prof.  Dr. Vogel, Department head of the unit Soil Systems Research at Helmholtz Centre for Environmental Research and coordinator of the BonaRes Centre for Soil Research. "Which soils were examined?  Which soil characteristics and decomposition rates were determined at thousands of sites in Germany? I am particularly interested in the extent to which our assumptions on soil properties, soil use and biological activity can be confirmed by the data collected. The scientific evaluation of all the data will take some time. We therefore ask for a little patience, but are already looking forward to being able to present the first  results in a few weeks. I would like to thank all participants for their commitment. Without them, such a extend data collection would not have be possible."

From the numerous local insights, the researchers derive an overall impression of soil conditions in Germany, from which spatial patterns may emerge or regional comparisons can be drawn. The scientists also examine whether the data collected by citizens can be incorporated into the BonaRes soil model (BODIUM). Based on this, site-specific recommendations for concrete action are to be derived for agriculture in order to use soils more sustainably and to preserve and improve soil functions. In addition, the results of the Tea Bag Index will be transmitted to the international research project "teatime4science", which uses the data for climate modelling.

Matthias Graf von Kielmansegg, Head of Department at the Federal Ministry of Education and Research, gives the starting signal for the second phase of the citizen research campaign "Expedition Earth" in the Science Year 2020|21 -Bioeconomics. together with Prof. Dr Hans-Jörg Vogel and Luise Ohmann from the Helmholtz Centre for Environmental Research,