You are here:
Home >
News >
In dialogue with practitioners at the DLG Field Days 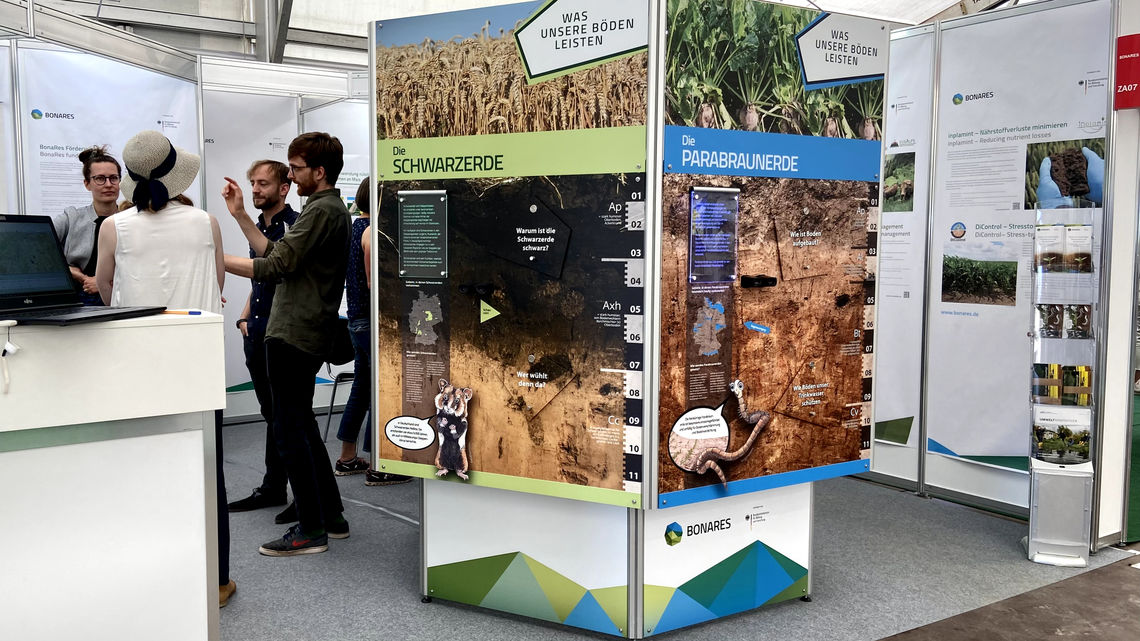 In dialogue with practitioners at the DLG Field Days

From June 14 to 16, 2022, the BonaRes funding initiative presented itself as one of about 400 exhibitors at the DLG Field Days at the Kirschgartshausen Experimental Farm near Mannheim. Key research areas and previous results of the individual BonaRes collaborative projects as well as the BonaRes Centre were presented.

Exhibits such as the model of the I4S RapidMapper, the agroforestry model of SIGNAL and the interactive soil column of the BonaRes Centre invited visitors to have conversations at the booth. In addition, a new online tool developed by the Kuratorium für Technik und Bauwesen in der Landwirtschaft e.V. (KTBL) and the German Meteorological Service (DWD) to determine harvesting days was presented at the BonaRes booth and queried for its practicability. The basis of this decision support tool is a decision matrix for soil trafficability developed in the BonaRes project SOILAssist. The CATCHY project also presented itself at the booth of its cooperation partner Deutsche Saatverendlung (DSV).

From BonaRes' point of view, a highlight of the DLG Field Days was the expert forum "Making scarce nutrients available", which was organised together with the DLG Committee for Arable Farming. After a brief presentation of the BonaRes initiative by Ute Wollschläger (BonaRes Centre), Norman Gentsch (CATCHY) spoke about the advantages of species-rich catch crop mixtures regarding nitrogen fixation in the soil. Oliver Schmittmann then presented the method for subsoil melioration developed in the Soil3 project. In the discussion moderated by Friedrich Baumgärtel (DLG Committee for Arable Farming), a lively exchange with farmers followed in the tent, which was well occupied despite the heat.

For BonaRes, the participation at the DLG Field Days was a complete success. Visitors and co-exhibitors were very interested in a professional exchange and gave a lot of positive feedback on the research in BonaRes. We are therefore planning to present BonaRes again at the DLG Field Days in 2024 - then with even more results and recommendations for action for sustainable soil management.