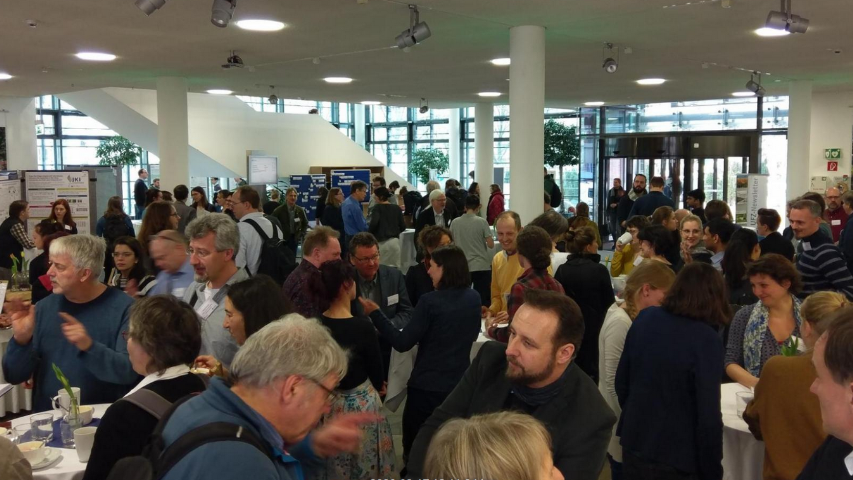 From 17th to 19th February 2020 the BonaRes Community met again at KUBUS Leipzig for the annual status seminar - it was the second of its kind in the 2nd funding phase of the BonaRes funding initiative. Special this year was the participation of the 6 new project consortia of the BMBF funding initiative "Plant roots and soil ecosystems: Importance of the Rhizosphere for the Bioeconomy". With almost 240 registrations it was also the largest status seminar so far.
Even before the official opening with greetings from PD Dr. Klaus-Peter Michel (Federal Ministry of Education and Research) and Prof. Dr. Hans-Jörg Vogel (Helmholtz Centre for Environmental Research - UFZ), the young BonaRes scientists started with an Early Career Workshop. The welcome addresses were followed by the first highlight presentations of the joint projects. Next was the first of two poster sessions presenting about 55 posters.
In the evening of the first day, doors opened for an interested public. BonaRes scientists invited to a public panel discussion entitled "Without soils nothing happens". Together with  book authors Florian Schwinn "Save the soils" and Susanne Dohrn "Soil. Threatened Helper against Climate Change", scientists discussed the significance of soils for humans and the environment, identified conflicts of interest in current social and environmental policy developments and made clear why we need to do more for our soils and what scientifically based approaches to solving these problems might look like.
Day 2 began with a keynote lecture by Timothy George (University of Dundee, Scotland) named: "Implications of interactions between roots and soil for the formation and function of the rhizosphere". His lecture was followed by the second round of highlight project presentations and a second poster session with about 60 posters. In the early afternoon, further highlight presentations followed, in which the new rhizosphere projects were presented for the first time.
The last day of the status seminar was, as in the past, reserved for cross-project workshops. In these thematic workshops, the BonaRes community had the opportunity to discuss cross-cutting issues and also to deepen further networking among each other.
Lena Roos for the BonaRes Centre